Hey maties!
It’s been a while since last issue, but it’s my birthday today. What could be a better execuse to take a day off from work, sit in a nice cafe, and compile some of the drafts I have into a new issue!

I originally had a longer opening, talking about how this list has grown to include over 290 real people, and how one of my goals is to reach 1,000 before next year. I planned to ask for help spreading the word.

But we are over this now already, aren’t we? Let’s keep it short and get into content.

Before this video, everything most people knew about AngularJS 2.0 dated back to the teasers in ng-Europe last October. People had to go through Github commits and issues or meeting/design documents (which are publicly available and I linked to some earlier in this newsletter) even just to get a feel of what is going on.

The video (from a usergroup meetup) has a code demo, which shows the new HTML templates as well as the directive (or component) definition syntax, with the C#-attribute like AtScript sugar.

It also has a good Q & A session on the progress, and how it relates to other areas like, obviously, Angular 1.x, and how Angular 2.0 will remove 2-way data-binding!!

The next Angular conference is already around the corner, coming March 5-6. Keep an open eye on it!

I intended to put this in here because I was like “Sure there will be Angular 2.0 stuff in there”, even though the schedule only mentions it in a single talk!

It’s also mentioned in the above video that the team has more to say about it in ng-conf.

Note that Angular 1.4 will be announced in ng-conf as well. That’s already in beta 4 stage (as 1.3.x is now at 1.3.13). If you follow the newsletter for long, you know the best place to keep up to date with versions, the changelog.

– Karma and Mocha for AngularJS testing

If you are like me, you are probably tired of so many names that come to mnind around testing, especially when it comes to AngularJS. This post helps a bit.

It picks a chain of tools, tells you what the choices it made are and what they do, and help wire them all into a usable workflow.

Implementing responside design involves a whole lot of CSS breakpoints and JavaScript interactions etc. With all that going in the page, it can be quite hard to test these interactions beyond testing in so many devices.

The article presents a relatively simple approach that you can use on the long run to make sure new UI components are not breaking the existing UI. The approach feels useful even beyond responsive design, although I haven’t played with it (yet).

Nice collection of blog posts about accessibility when using AngularJS (read the old ones first). Also has good work around improving the accessibility aspects of the TodoMVC sample AngularJS app.

The ReactJs prototype in Visual Studio is coming along nicely. #JSX #reactjs pic.twitter.com/vQwD65BK3M

Yes, Microsoft has found that React‘s popularity is not to be missed, and similar to catching up with Gulp support in soon-to-be-released Visual Studio 2015, they decided to support reactJS as well.

Aurelia is new JavaScript framework similar to AngularJS, EmberJS, and DurandalJS. Actually, it replaces DurandalJS, as it is from the same author.

– Introducing Aurelia
Remember Rob Eisenberg, the guy behind DurandalJS? He joined AngularJS team working on the new pre-release Angular 1.x/2.0 router, he wrote the “All about Angular 2.0” post, then he left the team hinting to go work on Durandal NextGen.

Just in case you missed hte news last month. It seems he created yet another framework instead, Aurelia. In this post there’s a video that shows so many similarities with what Angular 2.0 is supposedly going to look like, except his bits are actually available for using today, and he doesn’t go too far to create something like AtScript.

The framework is really interesting, and people -of course- have already started writing about ditching Angular for Aurelia, as usual with every other new framework out there ;)

The new version of Javascript, which introduces interesting features features like classes anad modules, and scope variables (vs. function-level variables).

It’s not yet supported in most browsers, but there are tools to translate it to Ecmascript 5, the currently supported JS we know.

– Getting Started with ES6 – Transpiling ES6 to ES5

A very simple tutorial on using 6To5 and gulp task runner to start writing code in ES6 today and translate it to ES5 for browsers. I here link to the entire (tiny) ES6 category in the blog for more about ES6.

Dan also has a nice Github repository of samples he links to in the post, which is very helpful for getting to know the new ES6 feature.

Dan Wahlin is a popular video course author and more, and the guy who made ths Angular in 60-ish minutes video I always recommend to devs new to AngularJS.

Yes, it’s true. ES6 is not final yet, although most of it is pretty stable, so it’s not something to be worried about.

Learning a language by reading its specification is a very interesting way, and (sometimes) is not that crazy. This is the PDF standard rendered as HTML instead of PDF, with links to the official PDF and Word documents.

Give it a look (note that this is the entire language specification, not just what’s new in v6).

– ASP​.NET 5 Updates and other improvements for Web Developers in VS 2015 CTP 6

Visual Studio 2015 CTP 6 came out yesterday. There’s a great official announcement, and the release page shows a (very) good summary of new features in all areas, but this link above is the detailed coverage of what’s new in ASP​.NET 5 (also known as ASP​.NET vNext).

Some of you remember I made this list to remember the cool links I neeed ot check or come back to. These up are a few!

HTTP/2 is done: http://t.co/uRdISX6WZH – hooray!
Time to undo all of those HTTP/1 hacks:
http://t.co/wlsw2QDOsr pic.twitter.com/a3HN7AMoyo 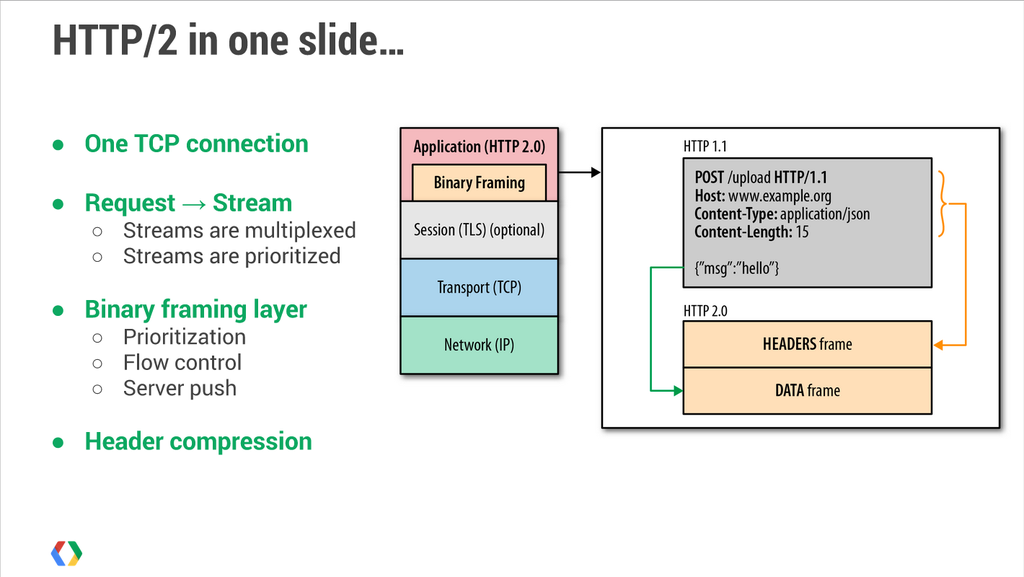 – HTTP/2, the first major change to HTTP in 16 years, has been finalized

It will take a while to be the norm of course, but HTTP 2 can be a real big deal. It promises a lot of speed enhancements, and one interesting enhancement is being able make multiple resource requests in one go. This alone can be very inspiring.

Let’s wait (quite a bit) and see what comes out of this. Again, it should be big!

If you really want to dig into the protocol, this is a good read. It’s by a Mozilla guy who works on the protocol itself.

And it’s not even a specification (so don’t freak out), it started off a presentation he delivered last year. Check it out, it shouldn’t be too bad ;)

I’m very surprised this site is not popular. It’s like egghead.io, a big library of free videos with some premium content. Except the videos cover a really wide range of topics.

It had a series about Web Components & Polymer Project that I found very useful for getting up to speed with it, but it also very wide range of topics like: SASS, CoffeeScript, Grunt, Gulp, WordPress and other topics, like Android dev and basic Mac command line.

This is a freelancing company that tries to market itself as a place for top developers. I don’t know who they are but I’m also not in the market for that need anyway. What I know is that they have very good articles and videos.

One thing I wish they did was provide some sort of tagging or categorization. I saw their AngularJS stuff and was nice. They also have some JS & UnderscoreJS-specific stuff. Should be worth skimming the list.

– Microsoft Virtual Academy
Not many people know that Microsoft have some great online courses on C#, Mobile Development, BI and even the prerelease ASP.NET 5. Yes, another unpopular gem!

– reddit.com/r/WatchPeopleCode
Not really something that would “teach” you, but think about it. live coding sessions streamed + recorded, on Reddit. Could it get any better?! Could it get any worse?!

You probably didn’t know that Toptal contacted me explicitly last month to include their videos in the newsletter. No affiliation of any kind was there.

I didn’t get anything directly or indirectly from linking to them. I just checked their videos, loved them, and decided that I should have found them on my own earlier! So, I included them in this issue.

If you find any good links (created by others or even by yourself), just email me.

I’ll check them out, and if I find them good for me, they’ll hopefully be useful for other readers of this newsletter as well. So, I’ll include them, and (unless you tell me not to) thank you for sharing awesomeness.

If you did like this newsletter, there are a few things you can show the love. Having an idea that can make even more awesome and emailing it to me is one thing I can’t thank you enough for (same for things that could make it suck less).

Another way to show love is to tell just one friend or colleague about it. Maybe in person, in email, on twitter, or whatever really. The more people reading this, the more responsible I feel about NOT making it suck.

How did I learn that?

As a bonus for coming here, I'm giving away a free newsletter for web developers that you can sign up for from here.

It's not an anything-and-everything link list. It's thoughtfully collected picks of articles and tools, that focus on Angular 2+, ASP.NET (4.x/MVC5 and Core), and other fullstack developer goodies.

Take it for a test ride, and you may unsubscribe any time.

You might also want to support me by checking these out [Thanks]:

Thanks for your support -- It does make a difference

How Do YOU Stay Up To Date?

GuruStop.NET is hosted on a Windows *SSD* VPS plan from SoftSys Hosting.

Something To Look At

Click here to help me & GuruStop.NET.
Link opens in a new tab.